Welcome to the new Ardrossan Bowls Club site. This site is a one-stop shop for all the information you need about our club. The menu on the left contains links to information about the club, our social activities and info for players. If you’d like to keep in touch on Facebook, click on the Facebook icon in the top-right of this page.

If there’s information you’d like to see, please let us know!

Congratulations to our own Rosie Stern, who was made a Member (AM) in the General Division of the Order of Australia for services to Hockey. 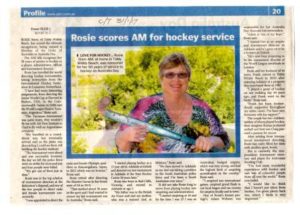 In 2005 it was realised that the club needed to make improvements to maintain the standards that had been achieved by the efforts of the previous committees and members. As it was a bowling club it was felt that we should apply our efforts towards the Bowling/Grass surface in the first instance and then follow with improvements to the club rooms and surrounds.

In 2005, with the aide of a Commonwealth Government Grant we purchased a walk behind/push Mini Spray which gave us an improved method of applying Fungicides, Fertilisers and Insecticides. We also commenced a program of Verti Draining (Type of Coring), we obtained the services of a professional adviser from Adelaide who advised our volunteer members in maintaining the greens. Since 2010 we have had the services of a Contract Green Keeper who has been proactive in rejuvenating the growth of the grass to a point that they are, collectively the best they have been in 10 years and once again amongst the best on the Yorke Peninsula. Along the way, as well as Verti Draining they have been Laser Levelled to ensure accuracy. This is essential to attract better players to compete in our Invitation Tournaments and to achieve a capacity of players at our 4 day Easter Tournaments. Eg: up to 144 players on any one day.

NB: Invitation Tournaments are a major source of fund raising which also exposes our sponsors, the town also benefits as 60 to 70% of the players and their wives/partners stay for the weekend.

2008 – 140,000 Litres of water storage tanks installed to harvest water from the club and other buildings including the shelters using assistance from the Commonwealth Government Water Grant.

2009 – Colour Bond Shelter built at the Northern end of “C” Green and connected to the storage tanks.

2009 – Extensions considered on the Southern side but after some lateral thinking it was decided to move the bar to the Western end of the club room and build an internal Cold Room which complimented the serving of Beer & Soft Drink. Up to this point our beverages were stored in an out-side shed. The new cold room became a storage shed which freed up the out-side shed for much needed storage of spare tables & chairs, large shade umbrellas etc. The relocation of the bar gave us much needed space to accommodate larger numbers attending Tournaments.

2010 – The kitchen was up-graded to give the ladies more room to prepare the meals. The cupboards had no backs in them which allowed Vermin to enter the cupboards. To keep the place clean it required extra work & vigilance. (Our ladies prepare and serve approx 1,200 2 course meals plus Morning & Afternoon Tea, also they prepare approximately 1300 Sandwiches during the Pennant Season)

2010 – Colour Bond Shelters built on the Northern end o “A” Green and connected to the Rain Water Tanks.

2010 – The Plynths/Banks were in need of repairs (Aluminium Capping was screwed to wood inserts mounted on the concrete, these had become loose due to the timber rotting) also the Rubber Aprons used to stop the bowls hitting the bare concrete needed replacing. It was decided to reshape the concrete banks and lay Synthetic Grass on the bank and to drape it over to act as an apron.

2011 – The laying of the Synthetic Grass on all banks of the 3 greens was completed.

2012 – The club rooms were being used more by members for weddings, birthdays and wakes as well as being used by other community organisations for meetings etc but we had no heating so it was decided to disable the Evaporative Cooling System and install Inverter Split System. This has now encouraged more to use the rooms during the winter when there is relatively no bowls activity.

2012 – We have recently completed the construction of a new BBQ shed which has Hot/Cold running water, Sink & Cupboards, Fitted Exhaust Fan, Overhead Fan, Whirly Gig and Tiled Floor. The old smaller shed was moved and is now a storage shed located near the Green Keepers shed. (During the Pennant Season and on the same night that Night Owls is conducted we prepare approximately 1,000 BBQ serves – Salads are prepared in the kitchen)

2013 – To enhance the investments of the last 8 years and to continue the clubs aims to be part of the communities endeavour to improve the environment that we live in it has been decided to remove the Asbestos Roof, (The last extension was 50 years ago) and to be part of the reduction of Carbon exhausted into the atmosphere we installed 20.25 Kw/H Grid Connected Solar Panels.

We are expecting an increase in membership in the next 2 to 3 years from employees employed by Rex Minerals who expect to employ 700 people and the possibility of a spin off from the Ceres Wind Farm if it goes ahead. We have now resurrected our plans to extend the club in a southerly direction by approximately 2.4 metres; the anticipated timing of this would be in 2 to 5 years once we assess the above. (The extension would amount to approximately 60 Square Metres an increase of 50% to the current usable floor space.)

Our 3 Qualified Coaches commit to coaching 10 to 15 students from the Area School who take part in the Annual SAPSASA Tournament in Adelaide, with some success. They were previously involved with coaching a squad of Under 18 players from the Yorke Peninsula that is Co-ordinated by Bowls SA.

Amongst a number of Charities that use the club are the branches of The Woman’s & Children’s Hospital & Anti-Cancer Foundation, also the ECH use the club to hold its information meetings for its residents from the nearby ECH Retirement Homes. Rex Minerals hold their monthly meetings with community members and have used the club for their Xmas Dinner catered for by The Angels, a group of people who fund raise for the Anti Cancer Foundation by catering for functions.